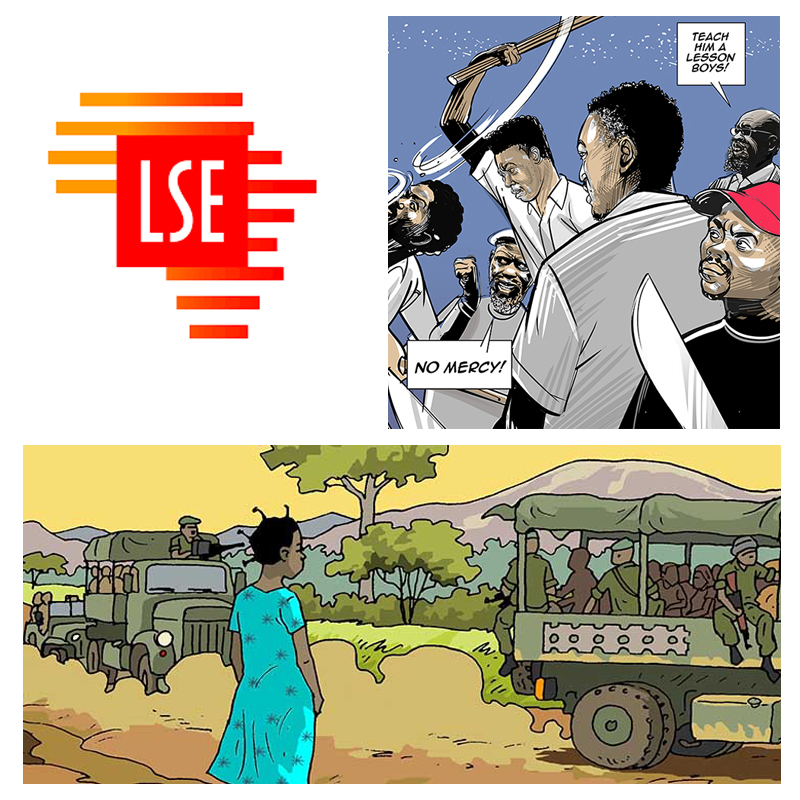 In partnership with the Centre of Public Authority and International Development (CPAID) of the London School of Economics and Political Science (LSE), we are producing a series of six comics on public authority in different countries across Africa. The project is supported by the Global Challenges Research Fund (GCRF) and the Economic Social and Research Council (ESRC). View the full comics by clicking on the links below:

Vigilantes: security or insecurity?
This comic focuses on a fictional town in Uganda, but is based on real events; what happens when a town tries to fight crime using vigilantes?

Making ends meet around Virunga
This comic focuses on Virunga National Park in the Democratic Republic of Congo (DRC). The park is Africa’s most biodiverse protected area, and the park guards are seen as heroes, creating a safe environment for tourists and protecting the wildlife. However, the people living near the park tell a different story.

This comic is also available in French and Swahili.

A poisoning in Palabek
Despite now living in relative safety, most residents of Palabek Refugee Settlement in northern Uganda still experience great feelings of insecurity and uncertainty. This story, in which an old woman is accused of witchcraft, shows how people feel abandoned by camp authorities and resort to taking action themselves.

It's who you know
This comic, based on research by Dr Patrycja Stys and drawn by Moses Kas, focuses on two women of different social status in a small town in the Democratic Republic of Congo (DRC).

Hazard Pay
2014, Sierra Leone. In the midst of the Ebola crisis sweeping the country, the comic tells the story of a burial team in charge of documenting Ebola cases and processing the bodies. Although a gruesome job, for most this was also their first formal employment that paid well and regularly.

Peace and politics in South Sudan
This comic, based on research by Dr Naomi Pendle and drawn by South Sudanese comic artist Tom Dai, looks at the peace process and the role of the army in South Sudan between 2005 and 2020.

There is no work from cartoonists yet.